Reviews of books about dogs by Sarah Meikle 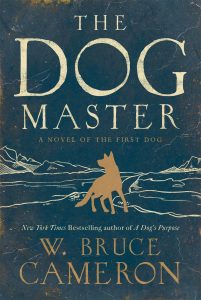 The Dog Master: A Novel of the First Dog

Bruce Cameron’s The Dog Master: A Novel of the First Dog is set in an unfamiliar environment and time in the Paleolithic Period at the dawn of the last ice age.  The cast of characters includes multiple tribes of primitive homo sapiens, modern men, and a handful of Neanderthals.

At the time, humans were both predator and prey, residing in a richly diverse but rapidly transforming landscape full of formidable carnivores such as lions and giant hyenas.

Neanderthals had been widely successful long before modern man entered the fray.  They were larger, stronger and even, with their larger brains, possibly smarter than their homo sapien relatives, yet they would not survive the next ice age.  They would, like so many animals that have walked the earth, become extinct.

These modern men, our ancestors, could have so easily met the same fate, yet, according to Cameron and other modern scholars, an unlikely alliance contributed to our survival: the alliance between Man and Wolf.

But how exactly did this come to be?  What would turn wolves, stealthy and capable hunters that likely saw us as a food source at one time, into man’s best friend?  That is the question that prompted the author to pen The Dog Master: A Novel of the First Dog, a captivating and rich narrative of the first human-canine alliance.

Unlike the ‘survival of the friendliest’ narrative supported by many much loved texts (including some that have been reviewed in this column over the years, such as Brian & Vanessa Hare’s The Genius of Dogs), Cameron’s book proposes an alternative evolution: a sudden evolution caused by a rare set of circumstances causing two species to need one another in a way their species otherwise wouldn’t have.

This theory of a more sudden evolution, an “evolutionary shortcut” from wolf to dog, is both compelling and well-reasoned.  Cameron’s relatable storyline makes is all feasible, even likely.  He creates a tapestry of small tribal cultures, peppered with origin stories of other human customs (from nail polish to hairstyles) that seem familiar, recognizable.

Yet, it is the discussion of the implication of this unlikely alliance on the human psyche that Cameron explores that is even more exciting.  Cameron proposes that this first improbable relationship went on to influence our entire perspective of the animal kingdom.

As Penn State anthropologist Professor Pat Shippman puts it, “No other mammal routinely adopts other species in the wild — no gazelles take in baby cheetahs, no mountain lions raise baby deer…. Every mouthful you feed to another species is one that your own children do not eat. On the face of it, caring for another species is maladaptive, so why do we humans do this?”

Cameron answers this question abruptly: it was chance that led to this occurrence and its profound advantages that led to its continued and widespread practice among humans through the ages.

Though the structure of The Dog Master: A Novel of the First Dog can, at times, feel awkwardly and needlessly fragmented, it is, overall, a wonderful and worthwhile read that will leave you sad to turn the last page and daydreaming about it’s premise long after reading.

W. Bruce Cameron is the New York Times bestselling author of 8 Simple Rules for Dating My Teenage Daughter, The Dog Master, and the A Dog’s Purpose series. In 2011 he was named Columnist of the Year by the National Society of Newspaper Columnists. He lives in California. (Bio courtesy of Amazon.com)

Consider making a reoccurring donation! All donations are handled securely through Paypal. Use any major credit cardOR your Paypal account. No need to create a PayPal account.